Compare prices on car hire in Upington from all the major brands and find the best deals. When you book through us, unlimited mileage and insurance are always included in the price given. 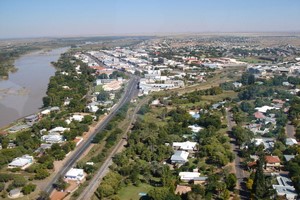 Upington is situated in the northwestern part of South Africa , and belongs to the province of Northern Cape.The city has 101,000 inhabitants (2008), and is a green oasis by the river Oranje – on the edge of the Kalahari Desert.

Principal occupation of the city’s tourism and agriculture.

The landscape consists of fertile plains, red sand dunes and hills. Upington is an important commercial center for the region, and has a wide selection of shops, hotels and restaurants. In the center you can visit the museum “Kalahari Oranje Museum” – which tells the history and culture.

A little outside the center is both a casino and a golf course.

The city’s most popular tourist attractions are mainly nature reserves and national parks in the area. Spitskop Nature Reserve is located 14 miles north of downtown, and has an abundance of wildlife including antelopes, gazelles, ostriches, zebras and camels.

Augrabies Falls National Park lies 118 km west of the city, and is most famous for its spectacular waterfalls of 60 meters. In addition, one can see antelope that lives in the mountains here, lynx, leopard and numerous bird species.

Upington Airport is located 5 km north of downtown, and from here the cost of both Cape Town and Johannesburg .