Do you ever dream about a visit to Lanzarote while touring at your own convenience? Then, with our guide, you can get well informed about the island even before taking the trip. The island offers several amazing sites to visit even with its small landmass. You can easily find a car rental agency to help you with an affordable car. Opting for a car hire service will help you easily tour the city and still maintain maximum privacy 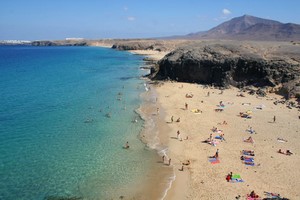 Lanzarote is an island in Spain located in the north-eastern part of the self-governing Canary Islands. The island is situated about 125 km (78 miles) off the northern coast of Africa and it spans an area of approximately 846 square kilometres (327 square miles). Lanzarote has a population of approximately 149,200 residents qualifying it as the third-most populated island in the archipelago after Gran Canaria and Tenerife. Also, it’s the fourth-largest among the Canary Islands. Being a crucial area for the fauna, flora and other features of special interest, it was declared a natural reserve by UNESCO.

Insula de Lanzarotus Marocelus was the town’s first-ever recorded name and it was drafted by an Italian-Majorcan cartographer called Angelina Dulcert who named it after a Genoese Navigator, Lancelotto Malocello. The island’s modern name ‘Lanzarote’ is derived from its first-drafted name. Natively, the island’s name was Tytheroygaka (something that’s all ochre), representing its natural clay colour due to its volcanic origin. Simply put, Lanzarote Island was created out of fiery volcanic eruptions and is dominated by solidified lava besides some rock patterns. The island has several areas of significance and some of these areas include:

The island of Lanzarote is situated close to the islands of Fuerteventura (11km/7mi southwest of Lanzarote) and Gran Canaria (335km/208mi further southwest of Lanzarote). However, all channels between the three islands are only accessible by ferries. The measurements of Lanzarote island are 60km/37mi from south towards north and 25km/16mi from east towards west. It comprises of a 213km/132mi coastline made of beach, sand and rocks. Its general landscape is made of mountain ranges – Famara and Ajaches, and a dessert (El Jable dessert), which cuts through Montanas del Fuego and Famara.

According to the Koppen climatic classification, the overall climatic condition for Lanzarote is subtropical-desert climate. A fair amount of rainfall is experienced only during the winter season with the summers characterised with dry weather. The average rainfall between the months of June and August is at most 0.5mm while between the months of December and February, less than 20 days of precipitation are experienced. Therefore, the temperatures during winter and summer are typically between 18 and 25 degrees celsius, respectively. In spite of that, the island still maintains a rich biodiversity of flora and fauna.

No one goes to Lanzarote and leaves without touring the Timanfaya National Park. Are you scared of the volcanoes? Well, don’t be! The volcanoes at the park have been dormant since 1824, therefore, you wouldn’t have to run away from fiery lava. The park is approximately 21.5 km (13.4 miles) from the Lanzarote Airport and it’ll take you a 20-minutes drive to get there. It’s too risky to traverse the thrilling land on foot but a tour bus or an electric twizy car that’s open on both sides will offer you a cool sight of the area.

Another amazing place to visit is Jameos del Agua caves which are 25.1 km (15.6 miles) northeast of series of Lanzarote. The city is home to several lava caves. The city is also rich in culture, tourism and art. In Jameos del Agua, you will find several types of restaurants, gardens, museums and a subterranean salt lake where you can feast your eyes on. The city is also home to a unique and rare species of squat lobster. This crustacean has a yellow-white colouration and hardly grows over one centimetre in length.

You can also visit Playa Blanca with the rented car. This city is 35 km (22 miles) southwest of Lanzarote. Playa Blanca has a robust economy and broke the record in 2008 as the first town on Lanzarote to have a dedicated local bus service. Apart from transport, the town also has other functioning infrastructures involving a state school, a private school, a notary, the bustling Rubicon Marina, a church, and a public library.

Timanfaya National Park is also another destination you can visit on this island and it is just 19.1 km (12 miles) west of Lanzarote. The park covers parts of the municipalities Tinajo and Yaiza and it is as large as 51.07 square kilometres (19.72 sq mi). A fun fact is that the ground entirely consists of volcanic soil. The symbol of the park is a statue “El Diablo” made by the famous César Manrique. Public access to the park is strictly regulated, however, there is a popular short route where one can visit by camel.

There are quite a few airports accessible to the island however, the island has just one major commercial airport. This airport serves as the main point of entry and the name of the airport was popularly known as Lanzarote airport, however, in 2019 it was renamed to César Manrique-Lanzarote Airport, which included the name of a popular local artist César Manrique. That year also coincided with the 100th year celebration of his birth.

In 2018, the airport recorded to have served about 7.3 million passengers which is almost 40% increase compared to ten years before that. There are currently two terminals built to serve passengers. The airport offers different car rental option for you to choose from. Some of these options are Top Car, Hertz, Goldcar and Cicar rental agency. Passengers often visit Brussels, Vienna, Madrid and London from this airport.

Another airport accessible to Lanzarote is Airport De Fuerteventura. Although the airport is not built on the island, it also serves Lanzarote. The airport connects over 80 destinations worldwide and serves at least 5.6 million passengers. People often visit Berlin, Dublin, Madrid and Helsinki. With two different terminals, the airport is well equipped to serve passengers well. The airport has several car rental options and some of them are Interrent, Budget and Plus car.

Lanzarote has a well-connected road network through the city. The speed limit for the motorways in the city is 120kph (80mph). However, in built-up areas, the speed limit is reduced to 50kph (30mph) while on country roads it is 90kph (56mph). You should keep in mind that there are fixed speed cameras between Playa Blanca and Arrecife. This is common for long stretches like the LZ-2 route.

Generally, parking options are mainly street sides or free spaces. You will most likely find a place to park for free and be safe. However, avoid places that are designated restricted by a yellow sign. Driving on the island is quite easy. One of the reasons is that the island is not too big and also the places are adequately signed to properly inform drivers. In addition to this, there is little, to no traffic.

There are two main roads that might pose a little more difficult than the others when travelling. The first is the LZ-10 route going down to the town of Haria. This route is a mountainside road, with 5 sharp bends. However, if you are patient, it should not be hard to drive on. The other route is the LZ-202 going to Mirador del Rio which is just large enough for two medium sized cars. The difficult part of the drive is when you want to loop on the scenic part along the cliff.