Compare prices on car hire in Salamanca from all the major brands and find the best deals. When you book through us, unlimited mileage and insurance are always included in the price given. 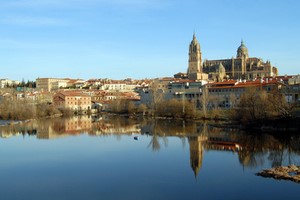 Salamanca is the capital of the province of the same name and belongs to the region of Castilla y León in northwestern Spain .Population was estimated at approx. 155 000 in 2008, and it is a little over 200 km to the capital Madrid in the southeast.Salamanca is located about 100 km east of the border with Portugal and lies on the River Tormes.Its history stretches back to before the birth of Christ, as the city was captured by Hannibal in 220 BC.

Salamanca is probably best known for having the oldest university in Spain, which was founded in 1220 Because of its long history, many old buildings to see in the city, including several churches as the two cathedrals from the 1100s and the 1500s. Square Plaza Mayor are from the 1200s and the historic district is listed on UNESCO’s World Heritage list. Salamanca offers several art museums in addition to a museum of bullfighting and historical museums.

Salamanca Airport is located approx. 15 km outside the city.