Compare prices on car hire in Toledo from all the major brands and find the best deals. When you book through us, unlimited mileage and insurance are always included in the price given. 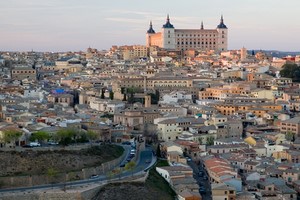 Toledo is the capital of the province of Toledo and the region of Castilla-La Mancha. The city is situated on a cliff and is surrounded on three sides by the River Tajo. It is approx. 90 km to the capital Madrid , while the border with Portugal is located nearly 300 km away.Toledo was an important administrative center in Roman times, and in 2008, the population of around 80 000

Toledo was Spain’s capital from 1085 to 1562 and the historic district is listed on UNESCO’s World Heritage list.The charming old town with its winding, narrow streets are the tip of the cliff, and here one can see many ancient sites. Alcázar is a fortification that was built on a hill above the city for about 1000 years ago, and the Gothic cathedral was built between 1200 – and 1400’s. There are many museums in Toledo, including the Museum of El Greco, where the Spanish artist lived.

Madrid-Barajas Airport is Europe’s 4 busiest airport and is approx. 100 km north of Toledo.