Compare prices on car hire in Borås from all the major brands and find the best deals. When you book through us, unlimited mileage and insurance are always included in the price given. 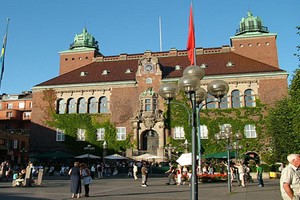 Boras is located in the southwestern part of Sweden , more specifically in Västra Götaland.The town has 64,000 inhabitants (2008), situated at the river Viskan. Boras was founded in 1622 by King Gustav II, and is primarily known for its textile industry and its many mail order companies.

The municipality has 121 churches, and Boras center Caroli Church from 1669 – the city’s oldest.

The most popular tourist attractions of the city’s Boras zoo (with an emphasis on African and European animals), the newly opened adventure park Upzone (which is next to the zoo and climbing lanes and bobbycar), Borås Art Museum (focusing on current) and Textilmuseet (a kulturhistoriskt museum that tells about the textile heritage). In addition, the city’s landmark –   “The old water tower” – an attraction.It was built in 1900.

Otherwise, the city has good shopping opportunities by mail order stores, factory outlets or at the city’s major shopping mall “Pestle Land” – which has over 100 shops and restaurants.

Boras has often concerts, events and exhibitions, and the city has many parks and green spaces.