Compare prices on car hire in Karlstad from all the major brands and find the best deals. When you book through us, unlimited mileage and insurance are always included in the price given. 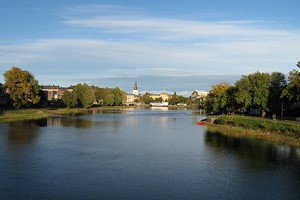 Karlstad (60,000 inhabitants in 2008) located in central Sweden , and is the administrative center for both local Karlstad and Värmland County.The city lies on the River Klarälven, which flows into Sweden’s largest lake Vänern.

Karlstad has several tourist attractions including Värmland Museum, the city’s main museum – with a focus on art, history and heritage within the region.

About 8 km east of downtown Alsters Manor, which was Gustaf Fröding birthplace.

Gustaf Fröding (1860 – 1911) was a famous Swedish poet, and the manor house can be such see exhibitions about his life and work. On site arrrangeres it often concerts, lectures and children’s – and the Alster Manor is located in scenic surroundings.

Karlstad is planning a new attraction in town – Brigade Museum in Värmland – which is scheduled inauguration in 2012, and become a museum that tells the Swedish defense history.

A little outside of Karlstad is Bergvik shopping center, which has 65 shops and eateries.