Compare prices on car hire in Kiruna from all the major brands and find the best deals. When you book through us, unlimited mileage and insurance are always included in the price given. 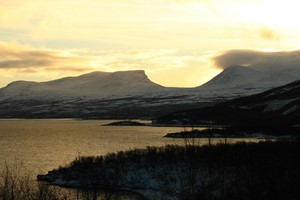 Kiruna (18 100 inhabitants in 2006) located in northern Sweden , and is part of Norrbotten County.The town is a typical mining community, located between the two mountains Loussavaarra and Kiirunavaara. Sweden’s highest mountain – Kebnekaise (2,104 m) – located 85 km from Kiruna.

All year round you can get a guided tour of the world’s largest underground iron ore mine – LKAB InfoMine Kiruna. The mine is still in operation, and one of the major sources of income.

Kiruna has a subarctic climate with heavy snow and cold in winter – which makes it a great winter destination. Visit the city’s summer, you can experience the midnight sun.

17 km outside the city are IceHotel, which is one of Sweden’s most famous sights. It builds new ice hotel every winter, which welcomes overnight guests from December to April. The hotel has two restaurants, and is known for its artistic ice interior.

Kiruna Church from 1909 is also a popular attraction in the city. The church is inspired by the Sami tent-like buildings, and has received several awards for its beautiful architecture.

Es Range Space Center is located 45 km outside the city, and a rocket launching base and a visitor center. The place is open from July – August and is a major tourist attraction for space enthusiasts.

Kiruna Airport is 9 km outside the city center and is the northernmost airport in Sweden.