Compare prices on car hire in Norrköping Airport from all the major brands and find the best deals. When you book through us, unlimited mileage and insurance are always included in the price given. 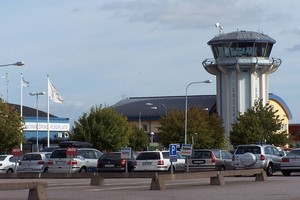 Norrköping Airport (NRK) is also called Kungsängen flygplats and is close to the E6 3 km east of Norrköping .There are regular shuttle between Norrköping and the airport. There are four car rental companies at the airport, it is Europcar, Sixt, Hertz and Avis. In 2009, 100,177 passengers pass through the airport, almost all concerned international flights. Airlines Cimber Sterling, Finncomm Airlines and Direktflyg serves the airport with Copenhagen, Visby and Helsinki as a destination. In May 2010, Ryanair opened a route to Alicante .There are also several charter flights from Norrkoping Airport between January and June.

Norrkoping Airport has a restaurant and a shop offering duty-free goods. Other amenities include wireless Internet and ATM. The closest hotels to the airport is located in Norrköping.