Compare prices on car hire in Södertälje from all the major brands and find the best deals. When you book through us, unlimited mileage and insurance are always included in the price given. 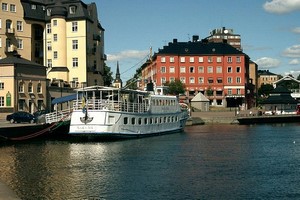 Sodertalje, which has approx. 68,000 inhabitants, lies in Södermanland (Sörmland) – specifically in Stockholm County, 36 miles southwest of the capital. Södertälje has had city status since around. 1380, but already in the 600s, it was a center here.

There are several interesting museums in Södtertälje – including Marcus Wallenberg Hall, which is a vehicle museum.   There are many cars in this museum (særøig branded Scania), but igså including some older rail cars.

On Torekällberget, on the outskirts of town, we find Torekällbergets Museum and Södertälje Museum. It has built up a historic urban environment with buildings from 1700 – 0g the 1800s, moved here from the city for a redevelopment there in the 1960s. Moreover, there is an area of ??Torekällberget called “country” where you can get an insight into farming in Södermanland in the past.

On Torekällberget is also the old windmill “Väderkvarnen” which is a familiar landmark for the city.