Compare prices on car hire in Trollhättan from all the major brands and find the best deals. When you book through us, unlimited mileage and insurance are always included in the price given. 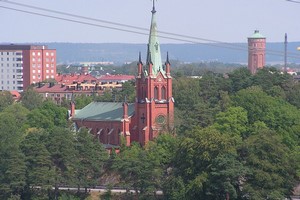 Trollhättan is an industrial city with approx. 46,000 inhabitants, situated in Västra Götaland County – 32 miles east of Uddevalla and 77 km north / northeast of Gothenburg .Trollhättan was granted city status until 1916 – and is best known as the production site for automotive brand Saab (which in 2010 was taken over by the Dutch car manufacturer Spyker Cars). The aircraft engine factory Volvo Aero is located in Trollhättan.

The most popular tourist attractions in Trollhättan is related to the Göta Älv, which flows through the city. This applies to the waterfall Trollhättefallen and – not least –   The 82 km long Trollhättan Canal, which connects Sweden’s largest lake, Vänern, the Kattegat.In the part of the channel located at the Trollhättan is Polhems slussled, a lock system named after the designer Christopher Polhem (1661-1751). The project was completed in 1752, the year after Polhems death – but the oldest lock (Lilla Edet Rica) was founded a generation earlier (1607).

Other sights in the city must SAAB Museum and Science Center Innovatum mentioned. Otherwise it has over the last few years developed into an exciting environment for film production in Trollhattan – popularly called “Trollywood”.

The regional airport Trollhättan-Vänersborg flygplats (with routes to Stockholm-Bromma and Arlanda airports ) located 5 km northeast of the city – while the nearest international airport is Landvetter in Gothenburg .