Compare prices on car hire in Djerba from all the major brands and find the best deals. When you book through us, unlimited mileage and insurance are always included in the price given. 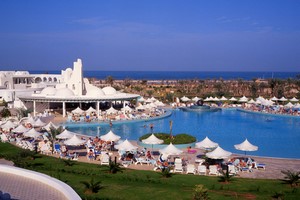 Djerba is located just off Tunisia’s southern coast.The island is located in Gabèsbukta belonging to the Mediterranean Sea. The largest city and capital is Houmt Souk where live about 60 000 (2007) and situated on the north side of the island. Djerba is the largest island in North Africa with a population of approx. 145000 (no year reference). In legend, Odyssey said that the figure of Odysseus visited Djerba, and up to 300 ADKr. called the island Meninx.

Djerba is one of the Mediterranean’s most fertile areas, and the green sea and the long beaches are helping to draw tourists. Because of its long history, there are many ruins and sights of Djerba. In the village Guellala have been potteries since Roman times and several locations around the island are the villages with white buildings and lush gardens. In the capital Houmt Souk, head of markets selling traditional clothing and blankets, jewelry and pottery products.

Djerba International Airport is located on the northwest side of the island.