Compare prices on car hire in Monastir from all the major brands and find the best deals. When you book through us, unlimited mileage and insurance are always included in the price given. 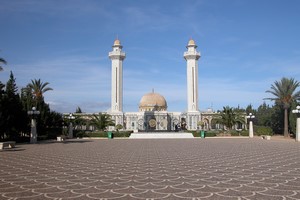 Monastir is an ancient city located in the northern part of Tunisia and is the capital of the province of Monastir.The city is situated on Tunisia’s east coast and adjacent to Hammametbukta belonging to the Mediterranean Sea. The population is estimated to be over 70 000 (2008). Monastir is located about 160 km from the capital Tunis, Monastir and the name comes from the French and the English word for monastery.

One of the best known sights are the well-preserved fortification Ribat of Harthema raised by Islamists around the year 800 Fortification was widely used in the Monty Python film Life of Brian, and today it houses a museum that deals with Islamic art.Another famous attraction is the beautiful mausoleum dedicated to Habib Bourguiba was the country’s first president. Monastir is also a popular resort and just outside the town one can see the ruins of the ancient city Ruspinum which was filed by the Punic and Romans.

Monastir Habib Bourguiba International Airport is about. 4 km from Monastir.