Compare prices on car hire in Tunis from all the major brands and find the best deals. When you book through us, unlimited mileage and insurance are always included in the price given. 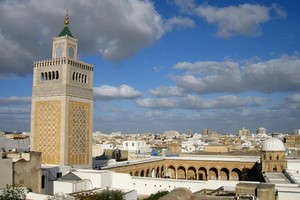 Tunis is located near the east coast in the northern part of Tunisia .The city is the capital of the country and is located on the west bank of the Tunis Lake, just off the coast of Tunisia, bordering the Gulf of Tunis. Tunisia has a port that leads into the Mediterranean Sea via a canal, with a population of approx. 1 200 000 (2008), this is the largest city in the country.

The old town or medina is one of the largest found in North Africa, stretching back to about 800 AD. The medina is small, narrow streets and historic sights such as the Museum of Traditional Inheritance Housed in a building dating from the 17th century. Museum of Medina is in Zitouna Mosque from approx. 700 AD. Belvedere Park is located near the Tunis Lake is the largest park in town, while the ruins of Carthage are to be found on the eastern shore of Lake Tunis and was allegedly founded by the Phoenicians in the year 814 BC.

Tunis-Carthage International Airport is located approx. 8 km outside the capital.