Compare prices on car hire in Antalya from all the major brands and find the best deals. When you book through us, unlimited mileage and insurance are always included in the price given. 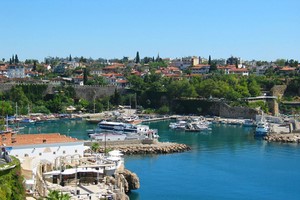 Antalya is located in southwestern Turkey and the capital of the province of Antalya.The city is asking the head of the Antalya Gulf that leads out into the Mediterranean Sea and is considered the capital of the Turkish Riviera because of its location.The population is around. 750000 (2007), and Antalya was founded around the year 150 BC Kr. of Attalos II and has been called Attaleia and Adalia.

Antalya is known to be a resort that supposedly leads into the purest water in the Mediterranean Sea. Old Town Kaleici is the most popular neighborhood and is characterized by either a culture that Roman and Byzantine. There are winding streets and historic sights such as the triumphal arch Hadrian’s Gate from the 1st century AD. Antalya Museum is a world-renowned archaeological museum with children’s section, and Yivli Minaret is a minaret from the 1200s is a familiar landmark. Antalya Golden Orange Film Festival is Turkey’s oldest film festival.

Antalya Airport had about 19 ??million passengers in 2008 and is located approx. 13 km away.