Compare prices on car hire in Bodrum from all the major brands and find the best deals. When you book through us, unlimited mileage and insurance are always included in the price given. 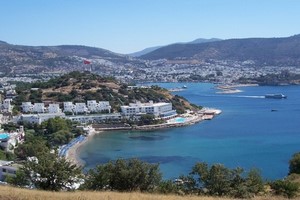 Bodrum is located on the southwest coast of Turkey and is located on the Bodrum Peninsula that juts into the Aegean Sea.The city belongs to the province of Mugla and had a population of nearly 120 000 in 2009. The popular resort island of Kos is located just outside of Bodrum peninsula and the area has a Mediterranean climate with hot summers and mild winters. Bodrum was built in the 1400s on the ruins of the ancient city of Halicarnassus.

One can see the remains of Halicarnassus including Mausoleum was one of the seven wonders of the ancient period. Mausoleum was probably built around the year 330 BC Kr. in honor of King Mausolos and consisted of Greek and Egyptian architecture. Another holdover from the time the amphitheater with a capacity of approx. 13 000 spectators. Bodrum Castle and Museum is a castle from 1400-century, which houses one of the best museums of underwater archeology. Bodrum is also a popular resort with many excellent beaches.

Milas-Bodrum Airport offers international flights and is approx. 35 km outside the city center.