Compare prices on car hire in Izmir from all the major brands and find the best deals. When you book through us, unlimited mileage and insurance are always included in the price given. 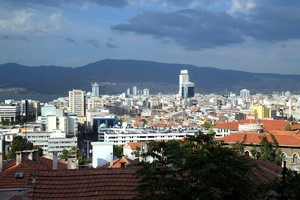 Izmir is located in western Turkey and is located in Izmirbukta that leads out into the Aegean Sea.The city is the capital of the province of Izmir is the third largest city in the country with a population of approx. 3200000 (2008). Izmir has the largest export port and second largest import port in Turkey. The city was founded in ca. 1100 f. Kr and was called Smyrna until 1929.

Konak is a known area of ??Izmir, and around the square are several attractions and sights. The old clock tower Izmir Clock Tower was built in 1901 and is a clear landmark in Konak Square. Around Konak Square one can visit several museums as the Museum of Archaeology and the Museum of Ethnography. At the height Kadifekale stands an ancient castle called Pago during Roman times, and Agora is an outdoor museum with remains of Roman settlements. Every year the festival including a jazz festival and a korfilmfestival.