Compare prices on car hire in Kayseri from all the major brands and find the best deals. When you book through us, unlimited mileage and insurance are always included in the price given. 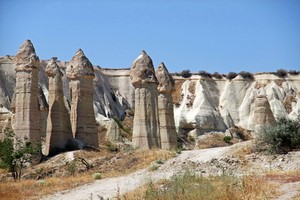 Kayseri has a central location in Turkey and is the capital of the province of Kayseri.It is a little over 300 km to the capital Ankara in the west and nearly 300 km to the Mediterranean coast in the south.Kayseri is located at the foot of the extinct volcano Erciyes, and in 2007 the population estimated to be at almost 600 000 The place where the town has been inhabited since 3000 BC.

Because of its long history, there are many old buildings to see in Kayseri, including a fort from the 500-number that can be found right in the center. The city boasts several mosques from the 1200s that Hunat Hatun Mosque and Haci Kilic Mosque. In Kayseri, like most other places in Turkey, the bazaars, or souks, and the most famous is Bedesten and Vezir Hani, both housed in historic buildings. Erciyes is great for winter activities and is a popular ski resort.

Erkilet International Airport is approx. 5 km north of the city.