Compare prices on car hire in Konya from all the major brands and find the best deals. When you book through us, unlimited mileage and insurance are always included in the price given. 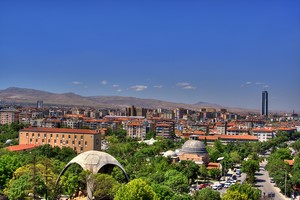 Konya is located in the southwestern part of Turkey and is the capital of the province of Konya.The city is located about 1000 meters above sea level and it is some 230 km to the capital Ankara .Number of inhabitants in the city was estimated at over 1 000 000 in 2009 and the figure rises to almost 2 million if you include the surrounding areas. Konya is one of the world’s oldest cities with a continuous settlement and was founded around the year 5000 BC.

Konya has many attractions to offer, including Iplicki Mosque which was built in the 1200s, Ala Eddine palace from 1220 and the Alaeddin Mosque from 1221 which is the oldest mosque in the city. Mevlana Museum is also called the Green Mausoleum and is an incredibly beautiful mausoleum that was completed in 1274 To learn more about the history you can visit Konyan Archaeological Museum which exhibits ancient artifacts as a Roman sarcophagus, Greek pottery and Roman inscriptions.

Konya Airport is located about 20 km outside the city.