Compare prices on car hire in Urgup from all the major brands and find the best deals. When you book through us, unlimited mileage and insurance are always included in the price given. 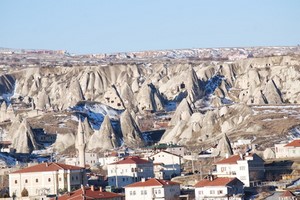 Urgup is located in the middle of Turkey and is part of the historical region of Cappadocia in the province of Nevsehir.The city is located in an area where the first settlements in the province was, and in recent times is the number of measured to be about 40 000 (2000). It is about 300 km to the capital Ankara in the north and 300 km to the Mediterranean coast in the south.

The most distinctive and famous sights of Urgup, the buildings are carved out of stone. For about 2000 years ago, the now extinct volcano Erciyes erupted that led to large amounts of porous lava rock, and today you can take in the hotels or rental houses that are cut into the caves and rock formations. Some of these have been converted into bars. In the center you can find a Turkish bath and there are opportunities for a luftballongtur in the area.

The nearest airport is Nevsehir Kapadokya Airport which is approx. 20 km west of Urgup.