Compare prices on car hire in Kiev from all the major brands and find the best deals. When you book through us, unlimited mileage and insurance are always included in the price given. 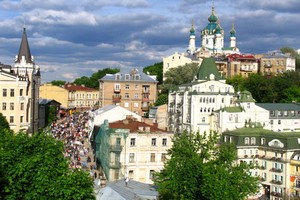 Kiev is Ukraine’s capital, is located in the north central part of the country by the river Dnepr. The city has 2.7 million inhabitants (2007), and is the administrative center of the province of Kiev Oblast.

The city was probably founded around 400 years, and has a number of historical and cultural attractions. Kiev is home to more than 25 museums, theaters, opera, several beautiful palaces and squares, botanical and zoological gardens and planetarium.

The most famous landmark in the city’s “National Museum of the history of the Great Patriotic War of 1941 – 1945”. This is a museum and a memorial – where the complex is dominated by the 62 meter high statue Rodina-food. The museum has exhibits of 300,000 objects and is one of the largest in Ukraine.

Other tourist attractions in Kiev include The Golden Portal – originally from the 1000-century cave monastery Petsjerskaja liver from 1015 and St. Sofia’s Cathedral from 1037 The cave monastery and the cathedral is a UNESCO World Heritage Site.