Compare prices on car hire in Montevideo from all the major brands and find the best deals. When you book through us, unlimited mileage and insurance are always included in the price given. 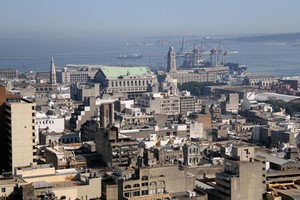 Montevideo (approx. 1.4 million inhabitants) is the capital of Uruguay .Its location at the mouth of the Rio de la Plata makes it an important port city – and a center for fishing in the Atlantic Ocean. The city was founded by Spaniards in 1726 and has been the nation’s capital since 1828.

There are a number of monumental buildings in Montevideo – particularly in the Empire style. Otherwise, the Catedral Metropolitana is one of the architectural sights. It was built in 1740 – but rebuilt after the neoclassical pattern already at the end of the century. Of more modern architecture can be mentioned that South America’s first skyscraper – Palacio Salvo (1925) – was built here, and it is still one of Montevideo attractions. The height (including the antenna on top) is exactly 100 m.

Other newer buildings is the TV tower Torre Antell (158 m), which was built in 2000. And then also Montevideo’s World Trade Center – albeit somewhat less than the 11 / 9 2001 was a terrorist target in New York.

The coastal town of Montevideo also has beautiful beaches in the immediate vicinity. Two of the most popular is Ramitez Beach and Pocitos Beach.

Airport Carrasco International Airport is located 5 km outside the city.