Are you considering spending your holidays in Atlanta, and wondering if you can get a car hire for easy movement within the city? Then you need not worry. You will find a lot of car rental companies offering affordable car hire services that will suit your needs. Renting a car is easy and straightforward. Most car rental companies are always at the airport or somewhere close. However, you can book online by going to your preferred car rental company’s website. 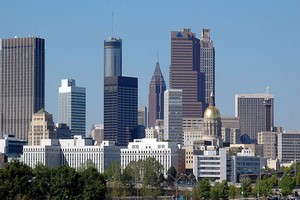 The city of Atlanta is a beautiful destination to travel to. The city is the capital of the State of Georgia in the United States. Atlanta is the fifth city to be the capital of the State of Georgia. It is the most populated city in the state with an estimated population of 498,044. Economically the city is ranked 10th in the nation with a GDP of $276 billion. Atlanta is known for several things, such as its musical heritage, sports teams, hospitality, and the busiest passenger airport – The Hartsfield-Jackson International Airport. Major cities near Atlanta include Birmingham, AL, Nashville, TN and Charlotte, NC.

The music cultural heritage of the city includes Scarlett O’Hara as well as hip-hop-and-R&B legends like Usher, Outkast, and Ludacris. The city has seamless and easy commutes, making it a lovely place for people to live. Atlanta has favourable weather conditions with June being the hottest (an average high of 32°C or 89°F), and January being the coldest month (an average high of 11°C or 52 °F). The City of Atlanta is home to world-class moguls, chefs and entrepreneurs. One interesting thing about Atlanta is the low cost of living and job opportunities.

Atlanta’s economy is driven by the prosperity of world-renowned companies like the Holiday Inn and Coca Cola and the prestigious Olympics events that took place in 1996. The city of Atlanta is popular for its delicious cuisine. Some of the popular dishes you will come across in Atlanta include fried chicken, barbecues, burgers, fried pies and naked dogs, sweet tea, Brunswick Stew and the ever-popular meat and three restaurants. Due to the calibre of the chefs, the city is known for a number of top class world cuisine restaurants too.

Additionally, Atlanta is known to preserve its historical character. Visit the Martin Luther King Jr. Historical site or the Atlanta History Center to know more about Atlanta’s history. Furthermore, another unique thing about Atlanta is the natural and man-made structures available. From the lush green foliage, colourful flora and the hike of stone mountain to the amazing sweeping city skylines. Other famous nature-oriented attractions in Atlanta include the Georgia Aquarium, Atlanta Botanical Garden, Piedmont Park and Zoo Atlanta. If you’re more interested in retail, you will find a mix of artisans shop and well-curated boutiques to satisfy your shopping cravings.

The city of Atlanta has a lot of interesting places that can be visited by the use of a rental car. Take a drive to the Georgia Aquarium where you will discover more sea life than other aquariums. The Georgia Aquarium is located in downtown Atlanta past the Centennial Olympic Park, and close to the CNN Studio Tours and the World of Coca-Cola. The distance to the location ranges from a minimum of 9 miles (7 mins) to a max of 12.2 miles (21 minutes) depending on your location and route.

Another interesting place that can be visited by the use of a rental car is the Swan House. The Swan House was built by Emily and Edwards Inman in 1928. Here, you will see how old Atlantans lived. It is located in the Atlanta History Center. The maximum distance to the Swan House is about 21.7 miles, which will take approximately 52 minutes to get there by rental car depending on the location and route. You can also check out the Smith Family Farm in the same location (Atlanta History Center).

Additionally, you can also visit the High Art of Museum with your rental car, the leading art museum in Southeastern U.S. It is located on Peachtree Street in Midtown. The museum holds some of the American’s most incredible collections of 19th and 20th-century decorative arts. The maximum distance to the High Art of Museum is about 14 mile, which will take approximately 27 minutes to get there by rental car.

If you want to explore Atlanta city in your rental car, you can check out some amazing restaurants offering the best meals in Atlanta. One of these restaurants is Dos Bocas, located in Downtown. The maximum distance to Dos Bocas is about 14.5 miles, which will take approximately 45 mins to get there by rental car. Other places that you can explore with your rental car are the Ponce City Market, Redbird Restaurant, The Atlanta BeltLine, Alma Cosina, etc. However, it is recommended that you make use of Google Maps when driving to your preferred destination.

The City of Atlanta, Georgia, is home to several commercial airports. One of the most popular airports is the Hartsfield-Jackson Atlanta International Airport. The airport is one of the busiest airports in the world. The airport is located in Clayton County, 10 miles downtown of Atlanta. The airport offers nonstop service to over 70 international and 150 domestic destinations. Some car rental companies you will find at Hartsfield-Jackson airport include Avis, Budget, Hertz, Enterprise, Thrifty and Advantage. The car rental options available include Mini-van, Luxury, Special, Premium, Full-size and Midsize. Some of the most popular flights departing from Atlanta Airport, are routes to Beijing, Dallas and New York.

Another famous airport in Atlanta city is the Fulton County Airport. This is a county-owned airport located in Fulton County, Georgia. The airport is 6 miles west of the central business region of Atlanta. It is also a general aviation reliever for the Atlanta International Airport. It is also called Brown Field or Charlie Brown Airport. Car rental companies at Fulton County Airport-Brown Field include Hertz, Alamo, National, Dollar etc. Car rental options include Economy, Luxury and Family.

DeKalb-Peachtree Airport is also a county-based airport located in Chamblee, DeKalb County. The airport is commonly known as PDK, it was built to be a general aviation reliever. The airport is the second busiest airport in Georgia after Atlanta International Airport. Car Rental companies available at PDK include Hertz, Easirent. You can choose from a variety of car options including Convertible, Luxury, SUV, Economy, People Carrier. There are still more airports in the Atlanta area including: Galleria Heliport, Skypad Heliport, Bridge Building Heliport and many more.

Atlanta has been experiencing traffic issues even before the introduction of cars. This was as a result of the focus on constructing buildings over infrastructures. Subsequently, the adoption of automobiles lead to complications when using the city’s strange grid. Additionally, the population of Atlanta has experienced tremendous growth, leading to more drivers on the road at rush hour. In Atlanta, morning rush hour starts as early as 4 am and can last till 10 am, but the worst traffic hour is from 6-7 am. However, traffic is usually at its worst from 3:30 pm to 7:30 pm in the evening.

If you do not want to get stuck in traffic, you should avoid the highways during rush hour. However, the best time to travel through Atlanta in your rental car is around 10 am in the morning and 7:30 pm in the evening. To make your movement easy, get a traffic app (Georgia Navigator). Atlanta City has speed limits, both on the highway and country roads. The maximum speed limit on highways is 70mph while the country roads have a speed limit of less than 70mph.

However, there are rules guiding speed limits in Atlanta. Also, there is a fine for breaking the rules. The roads in Atlanta are in good conditions, it is one of the best and accessible roads for drivers. As such, you need not worry when exploring Atlanta in your rental car. Atlanta has a lot of parking options which include daily lots, economy parking lots and Park-ride lots. The city also has long-term off-site parking facilities, all at affordable prices. The companies offering parking services include Lanier Parking Solutions, International Park Ride and Government Center Parking.