Compare prices on car hire in Chicago Airport from all the major brands and find the best deals. When you book through us, unlimited mileage and insurance are always included in the price given. 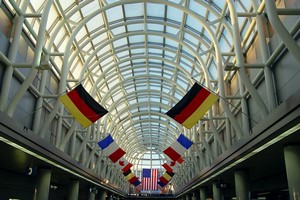 Chicago O’Hare International Airport (ORD) is located 29 km northwest of Chicago . In 2009, the airport award for best airport in the United States 10 consecutive year by Global Traveler Award.It is an hours underground connection between the airport and Chicago in addition to the continuous buses.

There are several car rental companies at the airport, including Alamo, Avis, Budget, Dollar, Enterprise, Hertz and National in the terminal 1,2 and 3 next to the baggage belts.

In 2009 visited all the 64,397,782 passengers Chicago Airport. The high number of passengers making it one of the four largest airports in the world.  It is very important in relation to international destinations, offering travel to more than 60 different. It is the main base for American Airlines and United Airlines. The airport has 4 different terminals by rail. The selection of cafes, restaurants, bars and shops are very good at all terminals. Other amenities include wireless Internet, medical center, chapel, banks, children’s playroom, business center and art exhibits. The Hilton Chicago O’Hare Airport is located in Terminal 2.