Are you looking to visit Chicago anytime soon? Opting for a car hire service will be a great option for you. There are several car rental services that are available for you to choose from right from the airport. Renting a car saves you the stress of having to tour the city using public transport. There is also the liberty to visit any place of your choice at your own pace. 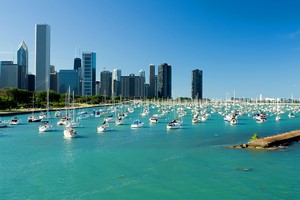 Chicago is a city in the state of Illinois, United States of America (USA) and considered to be one of the most populous cities in the state. In fact, it is ranked third among the most populated cities in the United State. The city is located close to Lake Michigan shores and was incorporated as a city in 1837. Chicago experiences four seasons, however, it is recorded that January and February are the coldest months.

The city of Chicago is economically diverse making it one of the most balanced economies in the country. According to estimates in September 2017, the state had a gross metropolitan product of 670.5 billion USD. It also has major financial and futures exchanges, including the Chicago Board Options Exchange, Chicago Stock Exchange, and the Chicago Mercantile Exchange (CME). The CME is owned along with the Chicago Board of Trade (CBOT) by Chicago’s CME Group.

There are several places to visit in Chicago as a tourist. You will find a mix of historic sites and modern buildings for you to feast your eyes on. The first is the Millenium Park, a magnificent structure used to showcase creative art, architecture and landscaping. Inside the park is the Crown Fountain. This building was designed by a Spanish artist Jaume Plensa. The structure features two 50-foot towers that are opposite ends of a shallow reflective pool

Visitors can also check out the Field Museum. This museum is home to unique artefacts from multiple eras and destinations. People majorly prefer to visit the aspect of the museum that showcases the ‘Inside Ancient Egypt’ exhibit. This features several aspects of the ancient Egyptian culture, where visitors can learn more about sustainability through hands-on activities. This site is great for students and fans of history who are looking to experience historical activities in real life.

After going through the rental process, you can start exploring the city and its environs at your own pace. We have selected a few places for you to visit if you have not compiled your list yet. You can drive to Westchester which is 35.4 km (22 miles) west of Chicago. Westchester has a diverse culture that spans across music, entertainment and education. It is also a bustling city which is home to many international companies. You can also take a ride to Oaklawn which is the home of the famous rapper Kanye West.

The village has a small landmass and has been in existence since its incorporation in the early 20th century. Oaklawn also has a well-established park system with different parks set up in different sizes. Currently, there are over 300 acres (1.2-kilometer square) of parks across Oakland. You can also take a drive to Naperville which is about 53 km (33 miles) west of Chicago. This is a suburb of Chicago and was founded in the 19th century.

Naperville has standard infrastructures cutting across, health, transport and parks. Another place you can drive to is North brook which is 40 km (25 miles) north of Chicago. The village is home to several notable athletes especially in sports like Basketball and Hockey. The village also has many parks and golf courses for residents and tourists alike.

There are several airports accessible to tourists from Chicago. The major one is the O’Hare International Airport. The airport is one of the biggest in the state of Illinois and recorded 83 million passengers as of 2018. This number is a 4.4% growth over the number recorded in 2017.

Passengers often visit popular places like Dublin, Delhi, Auckland and Lisbon from the airport. You also have access to different car rental options at the airport. Some of these options are Avis, Enterprise Rent-A-Car and Hertz. Another airport close to the Chicago is the Chicago Midway International airport.

The Chicago Midway International Airport has a standard infrastructure including 43 aircraft gates on three concourses with concourse A having the most gates. Passengers often visit Cincinnati, Zacatecas and Durango. Also, you can easily access several car rental options and some of the most popular ones are Avis, Hertz, Zipcar and Thrifty.

Just like other roads in the state of Illinois, the roads in Chicago are well maintained and well connected for easy flow of traffic. However, the roads are mostly congested which might lead to you spending more time on the road. If you are patient, the tour is worth it.

The speed limit is 48.2 kph (30 mph) on urban streets. However, the official speed limit on highways is 88 kph (55 mph). However, there have been cases whereby drivers are allowed to go up to 112 kph (70 mph) on highways. There are several parking lots available for you to use and some of them are Midway EZ Parking and Tower Self Park.