Compare prices on car hire in El Paso from all the major brands and find the best deals. When you book through us, unlimited mileage and insurance are always included in the price given. 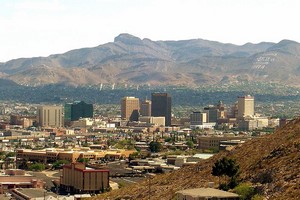 El Paso is located in the western corner of the state of Texas, by the river Rio Grande, and has approx. 742,000 inhabitants (2009) in the metropolitan area. The city is located where Texas, New Mexico and Mexico meet, and on the other side of the Rio Grande is the Mexican town of Ciudad Juárez.

The city is located 1,140 meters above sea level, and the highest mountain is North Franklin Peak (which measures 2,192 meters).

El Paso has both historical and cultural sights, and the building “The Plaza Theatre” from the 1930s is one of the city’s most famous landmarks.

A popular turstattraksjon is also El Paso Museum of Art, which has a permanent exhibition of more than 5000 works of art – made by European, American and Mexican artists.

“Chamizal National Memorial” is a cultural center in town that features art galleries, museums, theater and an amphitheater. The site is built in memory of the peaceful border dispute settlement between the U.S. and Mexico in 1963.