Compare prices on car hire in Philadelphia from all the major brands and find the best deals. When you book through us, unlimited mileage and insurance are always included in the price given. 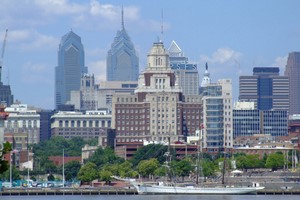 Philadelphia is located east of the U.S. – in Pennsylvania – and have a little over 1.5 million inhabitants. The city was founded in 1682, and had a long period of great political importance and influence.

Among Philadelphia’s historic attractions is Independence Hall – also known as the Pennsylvania State House (built mid 1700’s) – the most famous. The American colonial government held here when the Declaration of Independence was read 4 July, 1776. The time that it was then called with – Liberty Bell (“Liberty Bell”) – is now an American national treasure (cast in London in 1752).Both the building and at the UNESCO World Heritage Site.

The Congress Hall (built 1787-1789) is one of Philadelphia’s famous historic monuments. Here was the U.S. Congress its regular meeting place in the period 1790-1800.

Otherwise Philadelphia a number of interesting galleries, museums and other cultural institutions to showcase – including Philadelphia Museum of Art, one of America’s greatest art museums.