Compare prices on car hire in Maracaibo from all the major brands and find the best deals. When you book through us, unlimited mileage and insurance are always included in the price given. 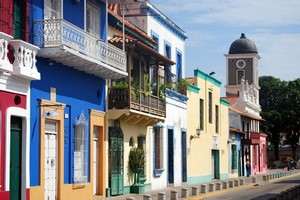 Maracaibo is a major port city with approx. 2 million inhabitants, situated at the mouth of Lake Maracaibo in northwestern Venezuela.

Maracaibo Lake, which is not a lake, but a wide gulf that is associated with the Caribbean Sea through the 54 km long Tablazo Strait. Large oil deposits around the lake has had an important significance for the entire Venezuelan economy, but has also led to a relatively large contamination problem, the authorities in recent years has worked hard to overcome.

One of the city’s major attractions is the 8.7 km long bridge over the Maracaibo Lake. It bears the long, official name Puente General Rafael Urdenata, and is both one of Venezuela’s most impressive buildings and the world’s largest betongbro.

Otherwise, the beautiful 1,700-century Basilica de Nuestra Señora de Chiquinquire – popularly called “La Chinita” – a very popular tourist destination in Maracaibo. One attraction of a different nature is the local music form Gaita Zulian, which is played everywhere in town. It is a blend of African and Venezuelan folk music.