Compare prices on car hire in Torshavn from all the major brands and find the best deals. When you book through us, unlimited mileage and insurance are always included in the price given. 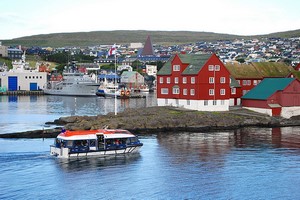 Tórshavn is the capital of the Faroe Islands archipelago, located in the Atlantic Ocean between Scotland , Iceland and Norway.Faroe Islands are formally part of Denmark, but has since 1948 had autonomy.Archipelago has two official languages: Faroese and Danish.

The city of Tórshavn, which was founded early in the year 825 of Norwegian settlers, has 12,345 inhabitants (2007), while the population of the municipality of Tórshavn is about. 20,000. Faroe Islands consists of 18 large and small islands, Tórshavn is the largest of them – Streymoy.

In the old town of Tinganes there are several preserved buildings from 1500 – and 1600’s – all with a grass roof. Otherwise, cultural Nordic House from Tórshavn attractions. It was built in 1983, and has an interesting architecture in glass and steel – but with a traditional grass roof. Other sights: Lista Longing Føroya (Faroe Islands Art Museum) and Føroya Historical Minnie Longing (Faroese National Museum).

Faroese only airport is Vágar Floghavn island Vágar. Otherwise, the ferry connection from Tórshavn to Hanstholm and Esbjerg in Denmark , Bergen in Norway , Scrabster in Scotland and Seydisfjordur in Iceland.