Are you planning your next vacation to Carcassonne and you want to go around the city with ease? You do not need to worry because you will find a host of car hire services at the airport or close-by. For this reason, you can easily rent the car of your choice. Also, you can make use of the car rental company’s available website to hire a car 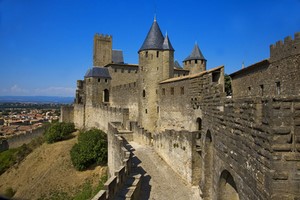 Carcassonne is a city in France located in the region of Occitanie with a population of around 50,000. The city has been inhabited since the Neolithic time and it is between the historic trade routes that link the Mediterranean Sea to the Atlantic together with the Pyrénées and the Massif Central. The city is about 80 kilometres east of Toulouse and it has a landmass of about 65 km square (25 square miles).

This is one of the oldest cities in France that historically can be traced as far back as 3500 BC. Additionally, the city was an important trading region in 6 BC. So, when you visit the city you will find a host of historical monuments that date back to the Neolithic era. The city is also famous for the role it played in the Albigensian Crusades as a stronghold for the Occitan Cathars.

The city has a subtropical humid climate, but it also has an obvious hot-summer Mediterranean climate. The winters are moderately mild and wet together with the summers averaging about 28°C in the daytime with low rainfall. The highest recorded temperature in the city is around 41°C. Typically for this area, the hottest months are between May and October while the coldest months can be found between December and March.

In terms of sports in France, Carcassonne is a big player. It was the finish city and starting point for stage 15 and 16 of the Tour de France in 2018 respectively. Also, rugby union is very popular in the city as with the rest of South West, France. Additionally, the city is also known for its art and its history is told in different creative ways such as Stephen Eicher’s 1993 album called “Carcassonne”.

The city of Carcassonne is filled with a lot of interesting places you can visit. As a tourist, you will have a wide range of sightseeing options to choose from. One of the most incredible places you can visit is the School Museum (Musée de l’école de Carcassonne), which captures the French school life between the 1880s and the 1960s. The distance from the airport to the museum is approximately 4.5 miles (7.4 km) and with a rental car, you can get there in 13 minutes.

You can also visit any of the numerous restaurants and local kitchens if you would like to taste Carcassonne cuisine. The city is known for their love for meat especially poultry animals. The Spanish-style cured ham is a known speciality in the city. One of the most popular restaurants is the Restaurant Gastronomique La Barbacane. With a rental car, you can get to the restaurant within 12 minutes as the estimated distance from the airport is 4.4 miles (7.2 km).

Another interesting place you can choose to visit is the historical village, Caunes-Minervois which has the Black Mountain behind it. The village surroundings are peaceful coupled with stone walls, orchards, olive groves and Minervois vineyards. You can get to the village from the airport with a rental car in 29 minutes with the estimated distance at 15 miles (24.3 km).

There is only one airport in the city of Carcassonne and it is known as the Carcassonne Airport, which is connected to a host of international and local destinations. Some of the most popular cities travelled to from the airport are Glasgow, Dublin, Manchester, London, Edinburg and so on.

Impressively, you will find a large number of car rental companies located at the airport or close-by. That way, you can easily rent the car of your choice and start your tour of the city. Some the popular car hire services you will find are Europcar, Hertz, Budget, Sixt and so on.

Before you proceed to choose a rental car service, you need to take a look at the company’s terms and conditions. That way, you will have a deep understanding of their policies and you will be able to avoid getting fined for breaking any part of the set agreement.

The road conditions in Carcassonne are in good shape, which makes driving around the city smooth and easy. However, it is recommended that you avoid driving during the rush hour period that occurs between 8 am to 9 am. Also, you must avoid breaking the speed limit and traffic laws.

The city has a speed limit of 80 mph (130 kph) on carriageways and on undivided highways, the speed limit is 49 mph (80 kph). For urban and residential areas, the speed limit is 31 mph (50 kph). Additionally, there are several parking options you can choose from. The options range from parking lots to valet parking, garages and so on.