Compare prices on car hire in Flensburg from all the major brands and find the best deals. When you book through us, unlimited mileage and insurance are always included in the price given. 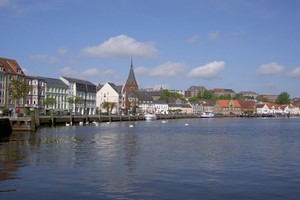 Flensburg is a city of around 85,000 inhabitants, located in Germany’s northernmost state – Schleswig-Holstein – just 11 km south of the border with Denmark , the head of the Flensburg Förde (fjord).

The city was founded by the Danes in the 1100s, and in 1284 received its trading rights. It belonged to when the Duchy Schleswig.   In the period 1460-1864 was Schleswig-Holstein in peronalunion with Denmark – and Flensburg continued to have a Danish feel. Still is a Danish one officially recognized minority languages.

Among the sights to the four medieval churches in the inner city is mentioned – the oldest, Midsummer, was built in the 1100s. The city also has several interesting museums, including Museum of Art Museum Berg, Schiffahrtmuseum Flensburg (Maritime Museum) – and, not least, the restored museum steamer “Alexandra”. It is located on the waterfront, and is Germany’s oldest “saloon-steamer” (founded 1908 in Hamburg ).

Flensburg is otherwise known as a very busy shopping town – and there are a number of major shopping centers here, both in and outside the center.

The nearest airport with regular scheduled traffic is Sønderborg Airport, Denmark, 42 ??km northeast of Flensburg. From here there is daily connection with the Copenhagen (Kastrup) .