Compare prices on car hire in Frankfurt from all the major brands and find the best deals. When you book through us, unlimited mileage and insurance are always included in the price given. 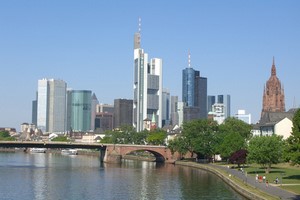 Frankfurt is located in the central German state of Hesse – and with its 670,000 inhabitants (1.8 million in the metropolitan area) Germany 5 largest city.It is often referred to Frankfurt in order to avoid confusion with the much smaller city of Frankfurt an der Oder, which is located east of the border with Poland. As the name says, runs the River Main through town.

Large parts of Frankfurt’s central city was destroyed during the 2nd World War – including the city’s historic center. Therefore, it is little old architecture left in the city. It appears primarily as a bustling, modern city – and it is also one of the EU’s most important financial centers.

Among the most famous attractions of the city’s Alte Oper, Frankfurt’s Old Opera House, as before 2 World War II was one of Germany’s most prestigious. After the war it was rebuilt as a concert hall – while the opera since 1951 has lived in a new building (Neue Oper). Otherwise, Frankfurt nearly 20 different museums – including an architectural museum, a film museum, several art museums and a museum of Jewish culture and history.

It must also be noted that Frankfurt is one of Germany’s busiest shopping areas.

Book a rental car in downtown Frankfurt or Frankfurt Airport. We offer rental cars for most purposes and budget whether it’s small economy cars or larger cars like the Ford station wagon or Toyota minibus. Car Rental in Frankfurt include insurance and unlimited mileage when you order through Car-hire.net.