Compare prices on car hire in Friedrichshafen from all the major brands and find the best deals. When you book through us, unlimited mileage and insurance are always included in the price given. 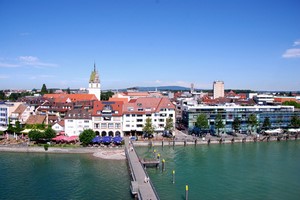 Friedrichshafen is a town of just under 60,000 residents, located far south of the German state of Baden-Wurttemberg. It originated in 1811 when two small, old towns on the northern shores of Lake Constance were combined.

Friedrichshafen location is very picturesque, and there are car ferry in regular service across Lake Constance to the Swiss “the neighboring town” Romanshorn. Moreover, the ferry in the summer with several other towns on the lake – including Constance, where the famous air-ship-builder Graf von Zeppelin was born.

Friedrichshafen tourist status is a lot of Graf von Zeppelin. It was namely here that he built and tested their airships (called zeppelinere) at the beginning of the 1900s – and one of its most popular attractions re is also the Zeppelin Museum.There is also a cultural center in the town that bears the name of Graf-Zeppelin-Haus – and for the adventurous Zeppelin Tours offers spectacular flights with “real” zeppelinere, ie with a smaller type which is made using modern technology.

The regional airport Friedrichshafen Airport , located 3 km north of the city, also operates some international flights – including to London / Stansted.