Compare prices on car hire in Kiel from all the major brands and find the best deals. When you book through us, unlimited mileage and insurance are always included in the price given. 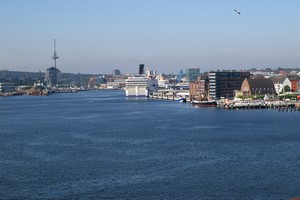 The port city of Kiel is located in northern Germany – namely the Baltic Sea, and is the capital of the state of Schleswig-Holstein.The city has 237,000 inhabitants (2008), and has ferry connections to many other countries – including Oslo in Norway and Gothenburg in Sweden .

Kiel, the Municipal Court in 1242, and has a university that was founded in 1665. The city is known to be a yachting destination – the famous annual sailing regatta “Kieler Woche” in June as a popular highlight.

The city was very damaged during the 2 World War, and has only a few historic buildings left. Famous tourist attractions in Kiel include City Hall from 1911 with its 106 meters high tower, the main church of St. Nicholas from 1875, the exhibition hall Ostseehalle, water tower Ravensberg, the botanical garden, computer museum, several art galleries, the Maritime Museum, the Zoological Museum and the Opera House.

15 km north of the center’s Laboe Marine Ehrenmal – a 85-meter high monument – in memory of sailors who died during the 1st World War II. The place Laboe has also good for swimming with sandy beaches.