Compare prices on car hire in Leverkusen from all the major brands and find the best deals. When you book through us, unlimited mileage and insurance are always included in the price given. 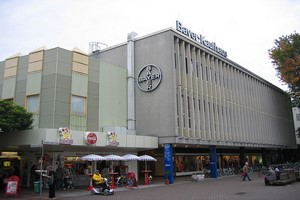 Leverkusen is located in the western part of Germany , by the river Rhine, and belongs to the state of North Rhine-Westphalia.The city has 161,300 inhabitants (2008), and is part of the so-called urban regions Rhein-Ruhr.

Leverkusen is a few mil to the east of the border with the Netherlands and Belgium , and a little south on the other side of the Rhine you can find the larger German city of Cologne.

Leverkusen is perhaps best known for its large chemical and pharmaceutical industry (Bayer AG). “Bayer Cross” is an attraction in town – one of the world’s largest neon sign / logo – made for the company Bayer.

A highly visible landmark in Leverkusen is the 72 meter high water tower and observation deck from 1978. Here, visitors can enjoy fantastic panoramic views over the city and its surroundings.

On the outskirts of the city is one point, namely the Japanese garden, which was designed by Carl Duisburg in 1923. The place is an oasis of calm and beauty, and is considered one of the nation’s ten most beautiful gardens. The Japanese garden is open all year for the public, and consists of such paths, ponds, waterfalls, bridges, tea houses, temples and dragons.

Also Schloss Morsbroich – a beautiful castle from 1775 – is a popular tourist attraction. The castle houses a museum of modern art, with over 400 paintings and sculptures. Outside you can visit the beautiful park.