Compare prices on car hire in Lübeck from all the major brands and find the best deals. When you book through us, unlimited mileage and insurance are always included in the price given. 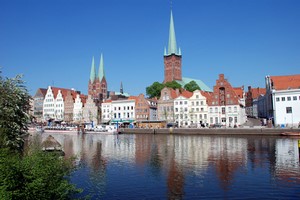 Hanseatic city of Lübeck is located in northern Germany – namely the Baltic Sea, approx. 65 km northeast of Hamburg .Lübeck has about 211,000 inhabitants (2008), and is the second largest city in the state of Schleswig-Holstein.

Lübeck is often called “city of the seven towers” because the old city’s seven church towers dominate the urban landscape.

Old Town is situated on a hill between the rivers Wakenitz and Trave – which flows into the Baltic Sea 15 km further north, at Travemünde. Old Town is listed as a UNESCO World Heritage Site, and is known for its beautiful medieval architecture.

Among the main tourist attractions of Lübeck’s St. Mary’s Church (built in the period 1250 to 1350), Burgkloster from 1229 – with the local historical museum, St. Peter’s Basilica – originally from 1400’s – with its 108 meters high tower, St. Anne – former monastery from 1502 – which today houses a museum of art and cultural history, Lübeck Cathedral from 1247, the City Hall from 1250 and the gate “Holsten” from 1478.The port is a city history museum.

In the suburb of Travemünde is Lübeck’s major port, and there has ferry connections to suchScandinavia, Russia and the Baltics.Travemünde is also a famous tourist spot in summer – with good swimming and sandy beaches.