Compare prices on car hire in Halkidiki from all the major brands and find the best deals. When you book through us, unlimited mileage and insurance are always included in the price given. 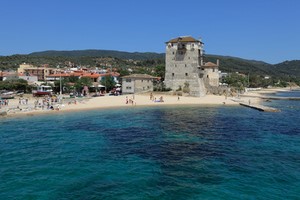 Prefecture of Halkidiki (Chalkidiki also called) is a peninsula in Greece which is located northwest of Central Macedonia – the Aegean Sea.The peninsula has 105,000 inhabitants, but in the summer, the population significantly because of the large tourism here. Halkidiki limits to Thessaloniki in the north – Greece’s second largest city. The capital of Halkidiki is Polygyros, located on the peninsula and has approximately 10,700 inhabitants.

South of Halkidiki is the three mountainous peninsulas Kassandra, Sithonia and Athos. On Kassandra far west   are several popular seaside towns and resorts – including Hanioti, Pefkohori and Nea Skioni.All are inviting sandy beaches, crystal clear water and excellent opportunities for water sports. This is also great hotels, and most tourist towns have good nightlife with restaurants and pubs.

In the southernmost part of the peninsula Athos – the far east of Halkidiki – live approx. 1700 monks in a monastery complex (20 single-monasteries), with roots in antiquity. The monasteries are situated around the sacred Mount Athos – and constitutes an autonomous mini-state within the Greek Republic. In this “monastic state” is the access forbidden for women, and men must apply for entry permit two months in advance.