Compare prices on car hire in Limnos from all the major brands and find the best deals. When you book through us, unlimited mileage and insurance are always included in the price given. 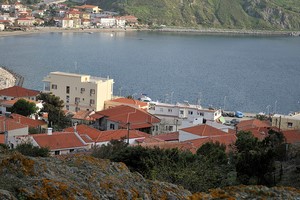 The island of Limnos (Lemnos) belong to the administrative district (prefecture) Lesbos – situated in the northern Aegean Sea, between Greece and Turkey .It has an area of ??476 km2 and a population of approx. 17,000. Over half of the population lives in the two cities Myrina (located on the west coast, and is the capital and commercial center) and Moudros (located on the east coast).

Myrina has a warm and beautiful harbor, where one of the most famous historical attractions – the Castle Kastro – situated on a hill. Kastro was first listed in 1186 and then rebuilt by the Venetians in the 1400s. Limnos is otherwise a number of interesting sights to offer, and here the ancient Polichni – located south of Limnos – mentioned specifically. It   had its heyday in the Bronze Age and was probably destroyed around 2000 BCNOK Archaeologists have several periods of work to uncover it – and the findings have documented that Polichni probably is one of Europe’s oldest cities.

Otherwise, Limnos offers beautiful beaches and picturesque villages. The island is a popular tourist destination, but it is not as tourist characterized many of the other Greek islands.

Airport Lemnos International Airport is located between the towns of Myrina and Moudros.