Compare prices on car hire in Kerry from all the major brands and find the best deals. When you book through us, unlimited mileage and insurance are always included in the price given. 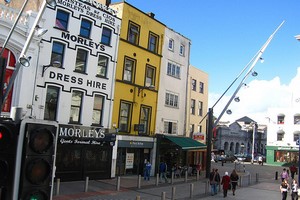 Kerry (Kerry County) is a county far southwest of Ireland – specifically in the province of Munster.It covers an area of ??4,746 km2 and has a total population of approx. 140000 (2007). Around 25,000 of the inhabitants live in the administrative center Tralee , which is also the largest city in the county.

Tralee was founded in the 1200s, and gained a central position when Kerry became a separate county in 1606. It is located where the Dingle Peninsula starts – and is a major tourist destination. Here you can visit Ireland’s largest water park – Aqua Dom – or you could for example drop by Kerry County Museum. In Tralee is also the National People’s Theatre, Siamsa Tire.

The scenery in Kerry is very vegetasjonsrik and beautiful, with a series of bays and peninsulas along the coast. Dingle Peninsula is part of the Killarney National Park, which includes the Killarney Lakes and surrounding areas.

15 km off the coast are several islands, the most famous is the steep rock Skellig Michael (Irish: Sceilig Mhichil). It was more than 600 years a center of monastic order, and there is a monastery from the year 588 ADKr. on a steep rock wall on the island. The monastery is listed as a UNESCO World Heritage Site. To get there from the beach, you have to climb all 620 steps. The entire island and neighboring island of Little Skellig, the other status as a nature reserve.

The airport is Kerry Airport which is located in the county, have regular routes to Dublin , London and certain destinations on the European continent.