Are you considering spending your next holiday in Tel Aviv, and worry if you will get car hire services to make your visit smooth and easy? You don’t need to worry, because there are several car rental companies in the city. Interestingly, most of these companies are situated at the airport, or close-by, so, you will find it easy to rent a car. You can also book a car online via any of the car rental sites. 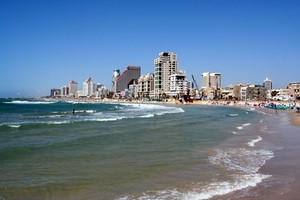 Tel Aviv is one of the most vibrant cities in the Middle East. Dubbed the “Mediterranean Capital of Cool” by the New York Times is a major city and the economic capital of Israel. It is located on the Mediterranean coast, some 60km (37 mph) northwest of Jerusalem. Tel Aviv was established in 1909 as a suburb north of the old city of Jaffa, which is the oldest port in the world. The city of Tel Aviv is situated at the heart of Israel’s hi-tech industry, called Silicon Wadi. Additionally, it houses the biggest diamond trading centre in the world.

With an estimated population of over 4 million people, the city of Tel Aviv represents over two-fifths of Israel’s total population. In the city, you will enjoy incredible nonstop nightlife and the cool breeze of the Mediterranean coast. Tel Aviv has a Mediterranean climate, with distinct winter and summer seasons. Also, it has less distinct intermediate seasons. The city’s weather condition is favourable with no natural hazards. In Tel Aviv, long summers are humid and warm with no rainfall. The warmest month is August, reaching an average max temperature of 30 °C, and an average min temperature of 24 °C.

Additionally, temperatures above 35 °C are rare due to the cooling effect of the sea. Tel Aviv’s winters are pleasant and cool, with January being the coolest month, having an average maximum temperature of 18 °C and a min temperature of 10 °C. Snowfall is not a common occurrence in the city of Tel Aviv. Tel Aviv houses most of Israel big corporation’s headquarter, and most foreign embassies are situated in the city. The rapid growth of the city was due to its proximity to the ancient city of Jaffa (whose Mediterranean port served as a gateway to Jerusalem).

Tel Aviv has a lot of beautiful and attractive places that you don’t want to miss. The city has a wide range of galleries and museums, which are spread around the city – from the world-famous Museum of Art to smaller museums like the Bauhaus Museum and the Museum of the History of Tel Aviv-Yafo, that tells the story of the city. The city, that was designated as UNESCO World Heritage for its White City, has a vast collection of eclectically styled buildings. Additionally, you will also find interesting places such as the ultra-cool Sheinkin Street, Park Hayarkon, Neve Tzedek, etc.

Tel Aviv has several amazing places you can see. You can explore everything the city has to offer with your rental car. Take a drive to the Lev Ha’Ir (The heart of the city in Hebrew). The area is known for fun night and day. It encompasses the Rothschild Boulevard – a mix of high-tech scrappers and the world-famous Bauhaus buildings. The estimated distance from the Ben Gurion International Airport is 25.0 km (15.5 mi) via Route 1 and 26.7 km (16.5 mi) via Route 4, which will take you approximately 48 mins, and an hour respectively.

Additionally, you can explore beautiful and amazing beaches in Tel Aviv. One of the best beaches that you can explore is in the city is Hatzuk Beach. It is the only beach that is not free for tourist. The estimated distance to the Hatzuk Beach is 48.2 km (29.9 mi) via Route 5 and 6, which will take 39 min to get there with your rental car. However, taking other routes like Route 4, and 1 might take longer. You can also try out places like Meir Park, Bograshov Beach, Escape Game KGB, Tayelet, Jaffa Port, etc.

There were initially two main airports in Tel Aviv. The Ben Gurion International Airport and Yafo Sde Dov (SDV) Airport. Yafo Sde Dov (SDV) Airport was closed to build residential neighbourhoods in its territory. However, Ben Gurion International airport (TLV) is still up and running. The airport is sometimes referred to as Tel Aviv International Airport. It is the biggest and busiest foreign airport in Israel, and it is located 12 miles from Southeast of the city. It is the main airport for freight traffic and passengers.

Additionally, the airport has four runways and four terminal buildings. The terminal three is used for foreign flights, one is for domestic flights, while four is for special events. The Airport is situated on Highway 1, which is the main road between Tel Aviv and Jerusalem. In 2017, the airport handled 8,816,579 foreign passengers and 404,961 domestic passengers. Tel Aviv international airport is one of the most secured airports in the world.

Tel Aviv has one of the most well-developed road networks in the country. The roads in the city are in good condition. As such, you will enjoy your drive when exploring the city. Just like other cities around the world, Tel Aviv also has its rush hour. When exploring the city, try and avoid the Ayalon Highway (which is known as the longest parking lot in the whole world ) during rush hour from Sunday to Thursday, usually from 7:00 am – 10:00 am and 3:30 pm to 6:30 pm.