Bologna is an amazing destination in Italy for tourists looking to enjoy an unforgettable experience. The city, at the heart of the Emilia-Romagna region, is the seventh most populous region in Italy. Car rental services are top-notch and a great way to discover the amazing destinations found around the city. The airport and train stations have several agencies that offer car hire services. This is practical and will take away the stress of having to commute to one of the agencies 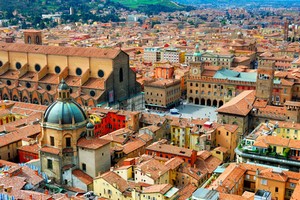 Due to the large activities going on in the region, tourists can easily get overwhelmed with everything that’s happening around town ever since your arrival. The city is located in the northern part of Italy, serving as a major commercial bridge for neighbouring regions. In Bologna, you have access to major industrial, agricultural, financial and transport infrastructure due to the activities of several large electronic, mechanical, and food companies. This contributes to the large economic growth of the city. Recent studies claim that Bologna has the third-largest growing economy among Italian provinces. Major cities near Bologna include Florence, Verona and Padua.

Although the city is quite small in landmass, it is home to one of the biggest permanent trade fairs in Europe. This is partly because there are over a million residents in the region. Bologna exhibits a very robust culture that spans across several areas of human endeavour. The city is also known for its famous cuisine prepared with dairy products and rich meats. Due to the open culture of Bologna, its musical tradition has evolved, expanding to international genres. There are quite a few other aspects of its culture that are easily noticeable in Bologna. These include:

If you have never visited Bologna and are planning to do so, you might consider opting for car rental, as this will give you the freedom to explore the city better and at your own pace. Also, you have the liberty to make several stops as many times as you desire. Besides, you have complete control over your privacy, especially when touring with your family. Renting a car has been made extremely easy, as you can find car rental agencies located inside the terminal of the main train stations around the city, offering affordable rental packages.

One major advice to tourists is to make sure that they do not hire cars in a hurry. It is important to thoroughly go through the terms and conditions available, car conditions and packages to understand what is required. You can also do a little price comparison to look for the best deals. However, if this is quite hard to do, there are online booking sites that can help you hire cars even before you travel. This is more convenient and saves time. You can easily compare prices, check out the description of the car and the packages on offer.

Before taking the trip to Bologna, you must decide on quite a few places to visit. However, as an addition, we will suggest you some interesting sights you might want to consider. The first is the Piazza Maggiore. This is a grand city square (piazza) in Bologna, with incredible scenery. It is very Instagrammable. Located in the heart of the old town, the piazza is home to several of Bologna’s top landmarks, tourist attractions and museums. The most prominent of it all is the Palazzo d’Accursio, found on the western side of the piazza.

Furthermore, you can also have a quick tour around the Piazza del Nettuno, which is commonly known as the fountain of Neptune. It is a monumental metropolitan fountain located in the iconic square, next to Piazza Maggiore. The fountain portrays the mannerism culture of the Italian elite during the mid-sixteenth century era which is still traceable to quite a few elites even in modern-day Italy. Another interesting site you should consider visiting are the Leaning Towers. This is an especially great site for tourists enamoured by the magnificence of ancient architecture.

In Bologna, there is a pair of towers that appear to tilt even more alarmingly than that of Pisa due to their narrow shape. They are the most prominent of all the medieval towers available in Bologna. The taller one is called Asinelli, while the second – which is the one with the largest degree of tilt – is called Garisenda. Historically, these twin towers were built as watchtowers and places of refuge for protection during attacks. However, their height became a status symbols for the noble families that built them.

The Asinelli tower has 498 steps and, on getting to the top, you would get bird’s-eye views of Bologna. If your visit is spiritually based you can check out Santo Stefano (St. Stephen Basilica). Santo Stefano is a basilica that embodies a complex of religious structures. Santo Stefano is locally referred to as the Sette Chiese which mean the Seven Churches. We cannot leave out the culinary expertise of the people of Bologna. A good place to get immersed in the experience is the narrow streets of the Quadrilatero filled little shops selling garden produce, cheese, pasta and baked goods.

There are several car rental options available at BGA to choose from. The common ones are Autovia which is an Italian company with operation in several Italian provinces. There is also Avis-Budget which is an international company offering online booking services and also operates in different countries. Other rental agencies accessible in the airport are Europcar and Maggiore to name a few. You can find the rental agencies at the Airport Terminal on the ground floor.

Most of these rental agencies operate every day within 6:00 AM and 12:00 AM. In addition to the options you can go for, you can rent a car with driver if you want to take the stress of driving off of you. However, different car rental agencies have different offerings and policies, you should check through online reviews to see which agencies will work best for you.

Bologna has a good road network connecting important sites. It sits in the centre of Florence, Verona, Padua, Rimini and Milan, with access to major roads for touring. However, due to the increasing influx of tourists into the city, the road is becoming increasingly busy. The city has two main Italian motorways that link the north and south of the country, this makes it easily accessible from major Italian cities.

With a detour from Parma to Genoa, you can go towards Milan, then Venice and Brenner. You can also get to the south, to Rome and from there to Bari, Lecce or Taranto. Bologna also has a ZTL (Limited Traffic Zone) which restricts driving activities. There are descriptive signs that warn drivers of these zones. Tourist will need to properly study how to recognise these signs and what each means.

Every vehicle’s license plate is checked in the ZTL to confirm if the driver is eligible to drive in the area. If found ineligible, the driver automatically gets a ticket. However, if you plan to visit a ZTL and you also plan to drive, there are secure public parking spaces for you. If you are close to the south side along the hills, Bologna has a ring road with public parking lots. In a case whereby you plan to lodge in a hotel, they will surely enlighten you about all you need to know.