Compare prices on car hire in Milan from all the major brands and find the best deals. When you book through us, unlimited mileage and insurance are always included in the price given. 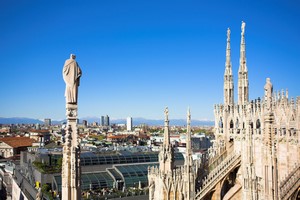 Milan is about. 500 km northwest of the capital Rome , between the rivers Ticino and Adda.Milan is Italy’s second largest city and is located in the Lombardy region, 120 meters above sea level. Milan has 1.26 million inhabitants in the city center, 3.8 million with the suburbs.

Milan is primarily known for being one of the world’s largest fashion cities, with London and Paris. It is a mecca for shoppers. The city is also the financial center, and center of culture and education. There are numerous churches, museums, art galleries, and one of the world’s largest opera house, Teatro alla Scala (1776-78), with its 3,600 seats. Pincoteca di Brera is one of Italy’s most important art collections. In Milan you can also visit the Castello Sforzesco was the seat of the chair, and has several museums and art collections. Milan has its own Leonardo da Vinci Museum. Cathedral Duomo is the third largest in Europe, and holds 40,000 people.

Car-hire.net offers car hire at several locations in Milan, including Milan Airport. As the prices quoted are compared from several car rental providers you are guaranteed a low price. Order as soon as possible for the cheapest possible price.