Do you love touring new places and discovering different attractions ? If so, Treviso should be at the top of the list of places you should travel to. The city is beautiful with delightful views that are appealing to the eyes. What’s more, there are several car rental companies in the city that you can use. So you don’t have to worry about transportation for getting to the sights that you want to see. 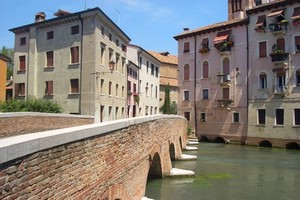 Treviso is a city that lies in the Veneto region of Northeast Italy and it is intersected by canals. It was originally a Roman municipality called Celtic Tarvisium but it has evolved over the years and is now the capital of the province of Treviso. The ancient history of the city is an interesting one that captivates the heart of tourists. During World War I and II, the city suffered serious damage but there are still several structures that date back to the 12th century.

As of 2017, the population of Treviso was over 83,000. It is the 60th most populous city in Italy and it has a prosperous economy. Treviso is famous for producing wine. Additionally, it is an important agricultural and manufacturing centre where rice, chemicals, textiles and ceramics are produced and made. There are also paper mills and other light industries. The main language spoken in Treviso is Italian but a few of the inhabitants also understand English and other European languages.

Treviso has a rich culture and the people still practise ancient traditions. The city is popularly referred to as Marca Gioiosa et Amorosa, which means a Joyful and Lovable Parish because the people know how to enjoy life. The Trevigianis are sports lovers and there are several different sports teams in the city. Among the sports you will find played in the city are volleyball, rugby, football and cycling. In 2008, the city served as the site of the UCI Cyclo-cross World Championships for professional cyclo-cross racing.

The climate experienced in Treviso is a temperate oceanic climate with mild differences between the highs and lows. The city also has adequate rainfall averaging 947 mm each year as well as moderate sunshine during the summer. December and January are usually cold in the city and the average high temperature during this period is 7 degrees Celcius. In terms of humidity, Treviso has some humid months with January being the highest (79% relative humidity)

One of the awesome tourists’ attractions in Treviso is Treviso’s cathedral the Cattedrale di San Pietro Apostolo. It is an impressive structure that is located in the northern part of the city. The 15th-century cathedral looks like an ancient Roman temple and there is also a crypt underneath it. Just 1.7 miles (2.8 km) and a 9 minute drive from the cathedral is the Piazza dei Signori, which is one of the city’s main squares. There are different architectural buildings in the square, and markets and concerts are held there regularly.

Art lovers can visit the Museo Bailo also called the Luigi Bailo Civic Museum. Here, you will find different art and archaeological collections from both the city and all over the world. The museum is situated in the northwestern corner of the city, and its collections date back to mediaeval times. Another landmark in Treviso is the Loggia Dei Cavalieri. It is a pavilion-like structure that was built in the early 12th century where the city’s noblemen would gather. Driving from Museo Bailo to Loggia Dei Cavalieri takes 8 minutes and the distance is 2.17 miles (3.5 km).

Villa Emo is one of the spacious villas designed by the great architect Andrea Palladio. The interior is painted with mythological and agricultural scenes that make it visually stunning. You can also visit the Pescheria (Fish Market), which is one of the oldest places in the city. It is a small island surrounded by elegant old buildings and you will also find sculptures of fishes and a mermaid in the river. Driving from Villa Emo to Pescheria takes around 32 minutes to cover the 16.6 miles (26.7 km) that separate them.

Treviso has one airport, the Treviso International Airport, which is also called Aeroporto di Treviso A. Canova. It is located in the southwestern part of the city, and it is used by both the military and the public. The common destinations that people travel to from the airport are Seville, Manchester, Valencia and Paris Beauvais.

There are a handful of car rental companies in Treviso. Among the notable ones are Europcar, Goldcar, Treviso Car Service, Hertz, Leasys, Avis and Budget. Many of these car hire companies are international brands and they have a good online presence. You can book your car on their websites before reaching the city. This will make it easy for you to find the car of your choice.

Before you proceed to use a car rental service, we suggest that you should read their terms and conditions. This will give you an insight into their requirements as well as their pricing. Additionally, many car hire companies charge additional fees for returning a car later than the expected date. So, always plan ahead how long you want the car for and if there are any changes, inform the car hire company ahead of time.

If there is one thing Treviso can boast of, it is the quality of its roads. The city has good roads with all the necessary facilities such as traffic lights and street lights provided. In terms of the speed limit, the accepted speed limit in Italy is 50 kph for urban roads, 90 kph for rural roads and 120 kph for motorways. Nevertheless, always watch out for traffic signs as the speed limit may differ for some roads.

Treviso has several car parks within the city that you can use during your stay. The cost of parking a car varies from one car park to the other but it is usually around 1 euro per hour. In some parts of the city, you may be unable to find a car park. However, you can use street parking on most streets in Treviso.