Compare prices on car hire in Ohrid from all the major brands and find the best deals. When you book through us, unlimited mileage and insurance are always included in the price given. 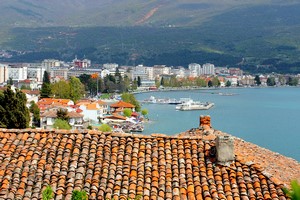 Ohrid is located in southwestern Macedonia Lake Ohrid Lake shores.The lake is the second largest Balkans. Ohrid is near the border with Albania , and is 695 meters above sea level, between 2800 meters high mountain.

Ohrid is famous for its ancient churches and monasteries, and is a religious center. St. Sofia Church from the 1100s is the fourth basilica in the same place. It has previously served as the mosque, and has the world’s largest fresco collection from the 1100s. St. Bogorodica Perivlepta church from the 1300s have also frescoes. The town of Ohrid is a UNESCO World Heritage cultural and natural heritage. According to archaeological findings, Ohrid is one of the oldest settlements in Europe. The lake is three million years old. The Cyrillic alphabet comes from the area, and Europe’s first university was here. Pilgrims come here to visit St. Clement’s tomb. In July of each year meet the world elite swimming here.   Ohrid Summer Festival organizes and drama festival in late July and early August.

Ohrid International Airport, St. Paul the Apostle is about. seven kilometers from the center.