Compare prices on car hire in Mexico City from all the major brands and find the best deals. When you book through us, unlimited mileage and insurance are always included in the price given. 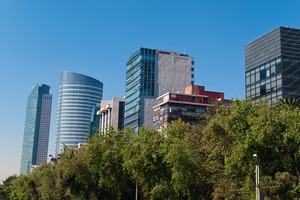 Mexico City is Mexico’s capital city and the world’s second largest urban area. The suburbs make up the city’s 22 million inhabitants, while in the city itself is home to around nine million. The town lies at almost 2300 meters of altitude in Mexico valley, surrounded by mountain peaks, the volcanoes Popocatépetl and Ixtacíhuatl at over 5000 meters high. The capital is linked to the country’s main ports.

Mexico City is located on the ruins of the Aztec capital of Tenochtitlan, but the city is unfortunately best known for having one of the world’s worst air pollution. The city is probably America’s oldest city and is believed to be founded in 1176 There are a number of museums and other cultural institutions like the National Museum and significant anthropological and historical museums, a planetarium and the zoo. Here is Latin America’s largest church, the Baroque cathedral with two towers which was begun in 1560’s. Basilica of Guadeloupe is one of the Catholic Church’s most sacred sites in America and a pilgrimage site. The old town is one of the world’s largest parks.

The international airport Benito Juarez is located six miles outside, on the northeastern outskirts of the city.