Compare prices on car hire in Mexico City Airport from all the major brands and find the best deals. When you book through us, unlimited mileage and insurance are always included in the price given. 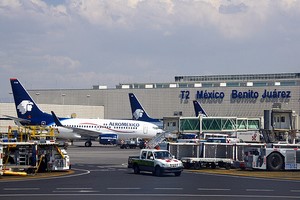 Mexico City International Airport (MEX), also called Benito Juárez International Airport, located 13 km west of Mexico City .It is the largest airport in Latin America. Both metro and bus are good means of transport to get between Mexico City and the airport. There is a good choice of car rental companies at both the national and the international terminal, some of them are Alamo, National, Avis, Budget, Dollar, Eurocar, Eurodollar, Kimcar, Gold Car, Hertz and Sixt.

In 2009, 24,243,056 passengers used to the airport.It is scheduled to be expanded so that it can accommodate 32 million passengers a year. One can travel to over 100 international destinations, and the busiest routes from Mexico City Airport is Los Angeles , New York , Miami , Houston and Madrid .It is the main base for Mexico’s largest airline, Aeroméxico. It is a very good selection of shops, restaurants, cafes and bars in Mexico City Airport. Here there are also pharmacies, medical center, business center, ATM and internet café. The airport has several hotels including Hilton Mexico City Airport Hotel and Airport Camino Real Hotel.