Compare prices on car hire in Tangier from all the major brands and find the best deals. When you book through us, unlimited mileage and insurance are always included in the price given. 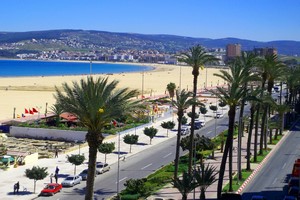 Tangier a city in northern Morocco at the Gibraltar Strait.669,000 inhabitants live in the important port city (2004). From here the boat to Spain and Gibraltar.

Tangier has a large market, and was known as a smuggling center for World War 2. The city is surrounded by walls and is like an amphitheater from the Bay of Tangier. The harbor is an old citadel and a sultan’s palace, with ethnographic and archaeological museum. The old town has buildings from the Middle Ages. Visitors can take a walk along the beach and go visit an art museum or the tomb of Arabesque, a well traveled Islamic legal scholar, quadi.Tangier was originally a Phoenician colony and originates from 1400 BC Kr. 100 f. Kr. Romans took over the city, and from 683 the city was Arabic. It had an important role as a crossing place for Spain on the Moorish times.Tangier has at times belonged to Portugal , France , Spain , and England , and has a large European town.

Tangier-Boukhalef airport is 12 kilometers from the city.