Compare prices on car hire in Lodz from all the major brands and find the best deals. When you book through us, unlimited mileage and insurance are always included in the price given. 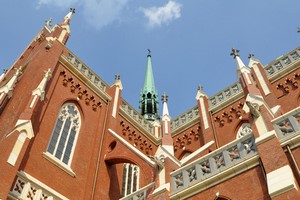 Lodz is Poland’s third largest city with a total of 790,000 inhabitants.The city is located 120 kilometers southwest of Warsaw in the middle of Poland .

Lodz is Poland’s leading textile manufacturing center, and is often compared with England’s Manchester .Lodz was incorporated as a city 1798, and has at times been under German domination. The city is a major scientific and cultural center with museums, theaters, opera and film industry. Camerimage, an international film festival for cinematografi held last week in November. The national film school is located here. The city’s main street is the 5-kilometer Ulica Piotrkowska. In the old town was part of Litzmannstadt Getto, who was the second-largest Jewish ghetto in Poland during the 2 World War II. Of interest to the Museum Sztuki and the city’s historical museum is mentioned. The former was one of Europe’s first art muses, while the latter has several decorated rooms dedicated to famous people from Lodz.