Compare prices on car hire in Legnica from all the major brands and find the best deals. When you book through us, unlimited mileage and insurance are always included in the price given. 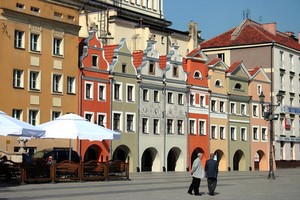 Legnica is located in western Poland near the German border. The city is located 65 kilometers west of Wroclaw in Silesia province.Total 107.0000 inhabitants (2005) live in Legnica.

The city formerly known as Lignica, was given to Poland by Germany in 1946 after World War II.In 1241 was the Battle of Legnica took place when the Mongol invasion came to Europe. Was an important city and grew after gold discoveries in Kaczawa River. Legnica has a number of old buildings, which John’s Church from 1294, Peter-Paul Church from 1333, and a castle from the 1400s, partially rebuilt after war damage in 1945. Among the city’s historical attractions are also Lubiaz Abbots House which houses a copper museum. Old Town also has a nice market with a Town Hall in baroque style.

Edgar airport in Prague is located 182 km from Legnica while Warsaw, John Paul II International Airport revives 279 km from the city of Legnica.