Compare prices on car hire in Szczecin from all the major brands and find the best deals. When you book through us, unlimited mileage and insurance are always included in the price given. 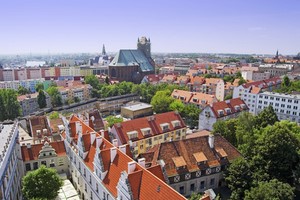 Szczecin is Poland’s seventh largest city in the country’s northern part near the border with Germany .The city that the German name Stettin is located 25 kilometers from the river Oder discharge in the Szczecin Lagoon.The city of Szczecin is divided into two, with the harbor in the middle. 407,000 inhabitants (2008) lives in the important port city which is also the railway junction. A hydrofoil runs to several Polish cities.

The town dates back to 900’s when a Slavic tribe settled here. In the 1200s German traders came here, and from 1278 became a member of the Hansa. Szczecin has several museums and theaters, the old city, several churches from 1200 – to 1400’s including Szczecin has a Renaissance castle from 1500 – to 1600-the number that is rebuilt as a cultural center. The city believes it has the world’s oldest theater still in operation, Pionier cinema. In April, the theater, and in the middle of June, the rock festival in Szczecin.