Compare prices on car hire in Timisoara from all the major brands and find the best deals. When you book through us, unlimited mileage and insurance are always included in the price given. 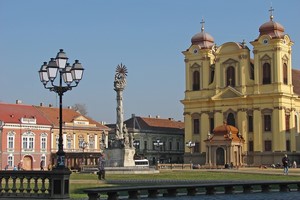 Timisoara has a central location in Romania and is situated near the border with Serbia and Hungary to the west.The city belongs to the region Banat and is the capital of the county of Timis. This is the largest city in the western part of Romania and its population was measured at over 310 000 in 2009. There has been a settlement at the site since Roman times, but TSR was first mentioned in sources from 1212

Timisoara has been ruled by many countries throughout history, including Turks, Austrians and Serbs, and all have left their mark on architecture. The Roman Catholic cathedral from the 1700s is a good example of Austrian architecture. Baroque Palace, also from the 1700s, houses the Museum of Art, Museum of Fine Arts, while the Banat Museum is located in a castle from the 1300s. In 1884 Timisoara was the first city in Europe and the other in the world after New York to get electric street lighting.

Traian Vuia International Airport is the second busiest airport in the country is about. 10 km from Timisoara.